The 26-year-old apprentice electrician, who grew up in the Barossa Valley, is looking forward to tackling the new event, which will be held over a 3.5km closed section of Sedan Hill Road (Stott Highway) between Keyneton and Sedan, just east of the Barossa. It is the longest event of its type in South Australia.

“I’ve wanted to compete on this hill since the day I first drove it,” says Jake who lives in Nuriootpa. “This would have to be a four or five year project in the making for me. It’s a dream come true and I hope to be competitive on the day.”

“You can’t afford to miss spectating at this event. It'll be like nothing you've seen before. Come early, get a good position and enjoy a great day of action up one of the best roads we have in South Australia.”

Jake’s nickname came about when he was younger and had long curly hair and his mates called him ‘squid’. 'DriftSquid’ was a natural progression once he became talented at drifting. “I started drifting as soon as I could afford to buy my own car. I saved for five years after I first saw the sport and became hooked. I bought my first drift car at 19 and haven't really looked back,” he says.

Carrying Jake up the event’s challenging 21-corner incline is his custom, hand-built Nissan ‘Sonvia’, which is powered by a Skyline RB27 engine making 450kW at the rear wheels. Each driver will get five runs of the course over the day, totalling 17.5km.

Jake has competed in drifting competitions all over the world in his ‘Sonvia’, including the National Drift Series (Australian Drifting Grand Prix), the State G1 Drift series (which he is currently leading), round one of the RedBull China Gymkhana Series (where he finished first), RedBull Drift Shifters and the D1NZ National Drifting Championship Series in New Zealand and a round of the D1GP in Japan. 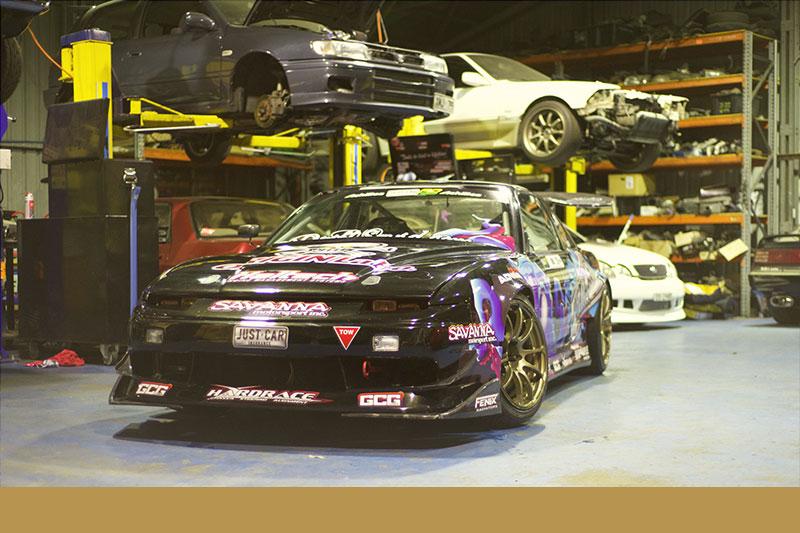 The ‘Sonvia’ has also been to numerous state and national level events across the country including Stadium Drift in South Australia and this year’s World Time Attack in Sydney. “I’ve owned this car for over five years now and have had to rebuild it many times,” says Jake.

“The ‘Sonvia’ is special in many ways but the engine is its main feature. It revs a lot more than many getting around and I drive it on the absolute limit all the time. I built the car to handle my driving style and it loves it – most of the time,” says Jake.

Whilst Jake competes in many forms of motorsport such as hillclimbs, he is currently best known for drifting, and it’s a sport he’s passionate about. “I love the experience of this car – driving something purpose built for drifting combined with the reaction I get from the crowd. The atmosphere at drift events is really like nothing else, I absolutely love putting on a show.”

With over 100,000 followers on Facebook and tens of thousands of views on YouTube, Jake is building a large following. “It’s just a really exciting sport, with so many different driving styles. There are so many ways to enter and exit each corner, which makes it even more interesting for people watching. I just think my followers enjoy what I do,” says Jake.

A field of over 70 classic and modern production based sports, rally, time attack and circuit cars will assemble for the inaugural Eden Valley Hillclimb, with competition kicking off at 10.00am. Each driver will get five runs of the 21-corner course over the day, totalling 17.5kms.

Trophies will be awarded to the fastest car in each class and to the driver who achieves the quickest run of the day.

Drivers and their cars will congregate throughout the day at the event’s start line, which is accessible from Sedan. Spectators will have the opportunity to rub shoulders with the drivers, see the cars up close and watch them off the start line.

The Eden Valley Hillclimb is facilitated through support from the Mid Murray Council and the approval of the Government of South Australia through the Department of Planning, Transport and Infrastructure and South Australia Police.

Motorists and local residents please note that Sedan Hill Road (Stott Highway) between Keyneton and Sedan will be closed for the purposes of the event between 7.00am and 5.00pm.