Driving a turbocharged and all-wheel drive Nissan Skyline GT-R V-Spec, Garwood recorded the fastest stage time of the day, achieving 1:10.43 over the event’s 1.8km closed road course, which was run seven times around the normally quiet suburban streets of the Midlands village.

Finishing 1.15 seconds behind the 18-year-old, was Launceston’s Scott Deane, in a nimble Mitsubishi Lancer Evolution. Rounding out the top three with the slimmest of margins, was Hobart’s Jamie Longergan, in another Nissan Skyline GT-R, a further 0.12 seconds behind Deane.

“I had to work hard to achieve the result,” said Garwood. “The GT-R is such a big and heavy car.

“I struggled in the morning’s wet stages because of the hard tyres, but when the sun came out the road’s temperature warmed, so we made some set-up changes to improve the car’s turn in and bump control,” says Garwood, winner of the 2016 Touring Car Masters Series Pro Sport class, Poatina Mountain Race 2015, and recent recipient of the Bursons Rising Star Award for Australian motor sport.

“Coming off the back of winning the Poatina Hillclimb last year, this is so good” says Damien. “We were up until 10pm the night before tuning the car, and it ran perfectly all day”

Finishing 2.56 seconds behind Moore, was Boat Harbour’s Phil House, in a highly-developed 1983 BMW-based Alpina C2. Third was Adrian Hodgetts of Elliott, in a 1970 Datsun 240Z, a slender 0.20 seconds behind House.

Overall winner of the Stuart Benson Petrusma Property Show and Shine car show, was Hobart’s Jon Chandler, who despite a damp start to the day, presented his rare 1975 Ford Falcon John Goss Special, in immaculate condition.

“Although rain caused some challenges in the morning, we delivered everything we set out to achieve in the first year of this colourful new motoring festival” said Event Director Stuart Benson.

“Overwhelming is the only way to describe the positive feedback from everyone involved. I really must thank the community of Ross, Neil Buckby Jaguar, the Australian Auto-Sport Alliance and the many dedicated officials involved, for playing all their important parts in bringing the festival from concept into reality.” 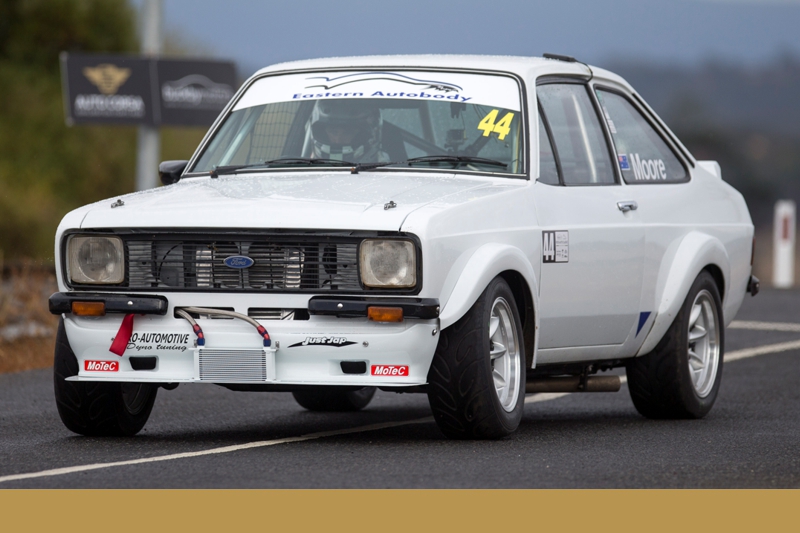