Held on Sunday 13 December 2015 over a challenging closed-road section of Sedan Hill Road between Keyneton and Sedan, just east of the Barossa, the Eden Valley Hillclimb attracted an exciting and diverse starting field of 86 entrants.

Based on Provisional Results, Glenney clocked a blistering time of 1-minute 41.136 seconds on his fourth and final passing of the event’s technical 3.5km course. Glenney’s impressive time also gifted him a Class F (4WD 0001>OVER) win.

It wasn’t an easy win for Glenney, with Enfeld’s Henry Beasley in his 2004 Mitsubishi Lancer Evolution 9 setting a time just 6/100ths of a second slower (1-minute 41.201 seconds) than Glenney’s winning run. 25-year old Beasley gained impressive pace over the day, missing out on the win by a narrow margin on his final run. 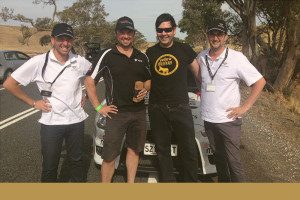 Third quickest was Henry’s father, John Beasley, in his 1996 Mitsubishi Lancer Evolution 4, with a time of 1-minute 41.953 seconds. Adelaide’s Team BRM boss Mark Rundle was fourth fastest in his 2003 Lancer Evolution 8 and Nick Streckeisen was fifth in a 2009 Nissan R35 GT-R.

“This was an extremely challenging hillclimb course, which makes it really rewarding to get it right,” said Glenney.

“It’s technical and its grippy surface really suits any vehicle, which makes it accessible to anyone interested in having a go.”

With the event’s competition structure permitting double entries, Glenney was able to share the Evo with its owner, Michael Flood, who lives in the Adelaide suburb of Albert Park. Flood was only a couple of seconds adrift of Glenney’s times on each of his four runs.

“Between our runs we were making small changes to the car’s set up to make it easier to drive and more predictable, which obviously paid off for us on the day,” said Glenney.

The event’s other class winners and their quickest times were:

“Feedback from competitors, spectators and local community groups involved has been really positive. Over the next 12 months we will be seeking further feedback from our customers and stakeholders to help us further refine and build on the event for 2016.”

“From our perspective, it’s great to be able to provide South Australia’s motor racing community with yet another exciting grass roots motorsport competition – which just so happens to be the longest of its type in the state.”

The event’s Provisional Results will become final at 6.30pm on Friday 18th December 2015.

**Feature image courtesy of Any Given Reason