The inaugural Eden Valley Hillclimb, which will be held in South Australia’s Barossa region this Sunday 13 December 2015, has attracted an impressive field of nearly 90 sports-bred circuit racing, tarmac rally and drift cars from across the state.

The event, which is the longest of its type in South Australia, will be conducted over a 3.5km closed road section of Sedan Hill Road (Stott Highway) between Keyneton and Sedan. Drivers will each get five runs of the course, with competition starting at 10.00am and finishing at around 4.00pm.

The 21-corner, well sighted and flowing all tarmac course snakes up the eastern slopes of the Mount Lofty Ranges. Drivers will campaign to achieve the fastest time in their class as well as the fastest overall time of the day.

Spectators can take in the event’s field of 87 2WD and 4WD competition cars from the start line which, on the day, is only accessible from Sedan due to event road closures.

“We’re absolutely humbled by the incredible level of support we have received for the Eden Valley Hillclimb in its first year,” says Event Director Stuart Benson of promoter, Auto Corsa Group.

“Assembled for the first event is a rich competition field of interesting and exotic sports racers, which will be driven by some of South Australia’s most impressive drivers from across a range of motorsport disciplines.” 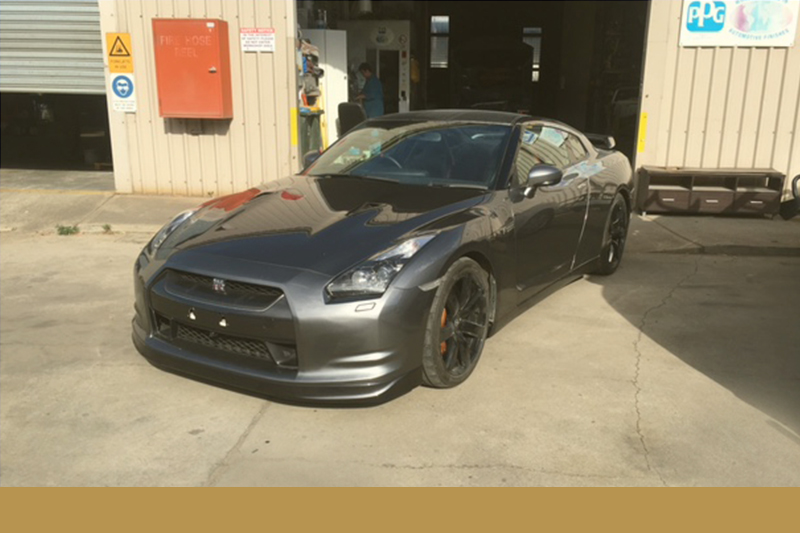 Drivers to watch in the event’s 4WD class is Leabrook’s Nick Streckeisen in a 2009 Nissan R35 GT-R and Team BRM boss Mark Rundle of Beverely in a 2003 Mitsubishi Lancer Evolution 8. Streckeisen won last year’s Willunga Hillclimb and finished second at the 2015 Mt Alma Mile, while Rundle has displayed his car’s potential at previous Targa High Country and Targa Adelaide events and most recently finished second at this year’s Willunga Hillclimb. 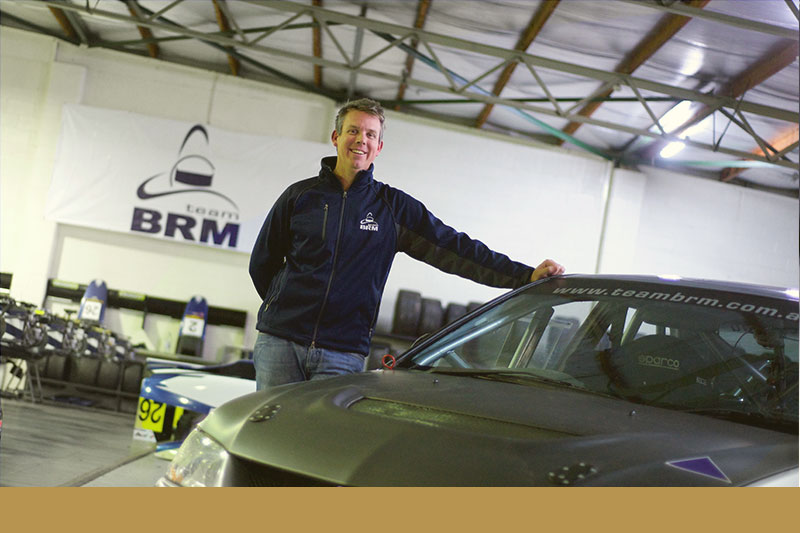 Other top 4WD contenders include Enfield’s John Beasley in a 1996 Mitsubishi Lancer Evolution IV, who was third at this year’s Willunga Hillclimb. Daniel Smith of Sellicks Hill in a 2001 Mitsubishi Lancer Evolution VII will also be impressive. Smith stole the show at Willunga this year, with the fastest single run of the day, and goes into the Eden Valley Hillclimb as a clear favourite. 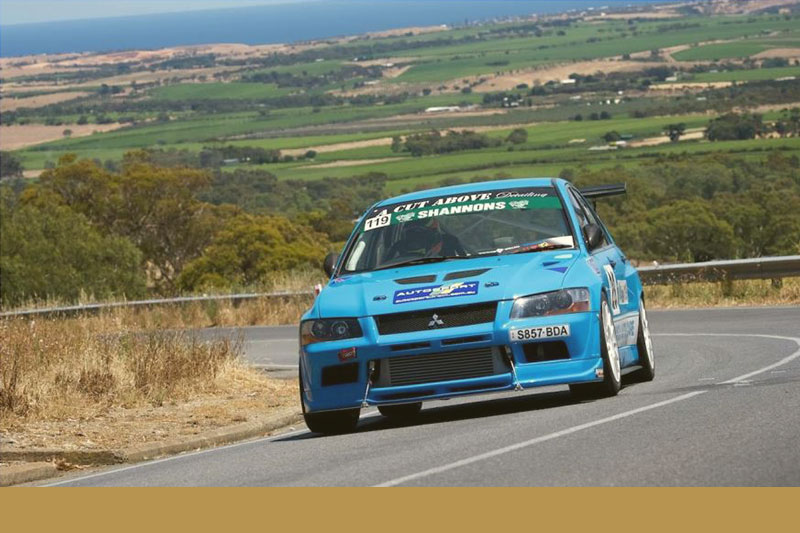 2WD favourites include Peter Mayer of Kensington Gardens, in an ex-Jim Richards 2007 Porsche 911 GT3 RS and Balhannah-resident Chris Edmondson in a 1994 Nissan 180SX. Edmondson was the second fastest 2WD car at the 2015 Mt Alma Mile.

International drifting sensation, Nuriootpa’s Jakes Jones (aka DriftSquid) is bound to put on a show in his hand-built 1989 Nissan Sonvia, while hillclimb regular Craig Williams, of Blewitt Springs, will also impress in his South Australian-developed 2007 Ultra Performance Rotary.

Another driver looking to chalk up the fastest time of the day is three-time South Australian Rally Champion, Matt Selley from St Georges, who will be competing in a newly- constructed Group 4 specification, 2.4-litre 1979 Ford Escort MkII.

Maylor motorsport stalwart Bernie Stack will be quick in a 1971 Porsche 911 2.2 and has proven his driving ability both on the circuit and in tarmac rallies across the country.

Tarmac rally regular Tim Knappstein, who finished third outright at this year’s Classic Adelaide, will turn heads in his stunning 1969 Datsun 240Z. Knappstein, who lives in Lobethal and owns Riposte Wines, will share the car with his son Nick. 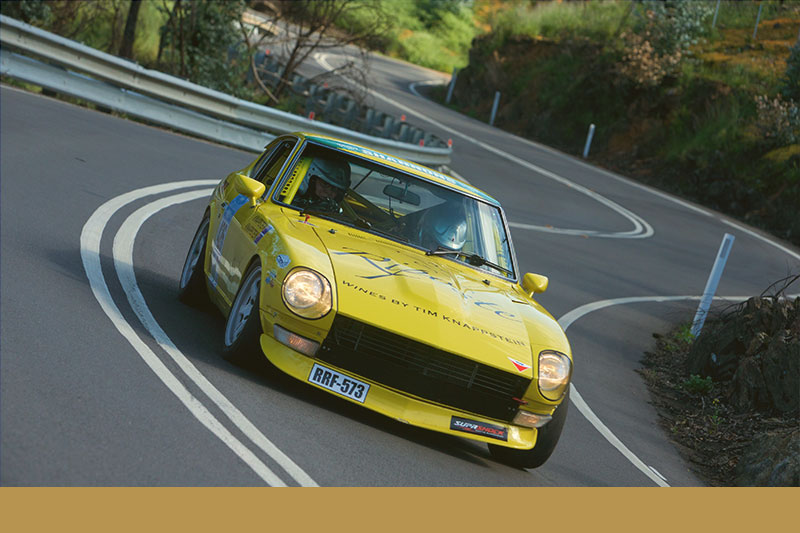 Tim Knappstein's Datsun 240Z will be sure to turn some heads

Another classic favourite is the 1965 Ford Mustang of Tanunda’s Tim Lynas. Tim, who is an Australian production car racer and long time tarmac rally driver, will suffer no lack of urge as he steers his thundering 5-litre V8 Mustang up Sedan Hill Road. 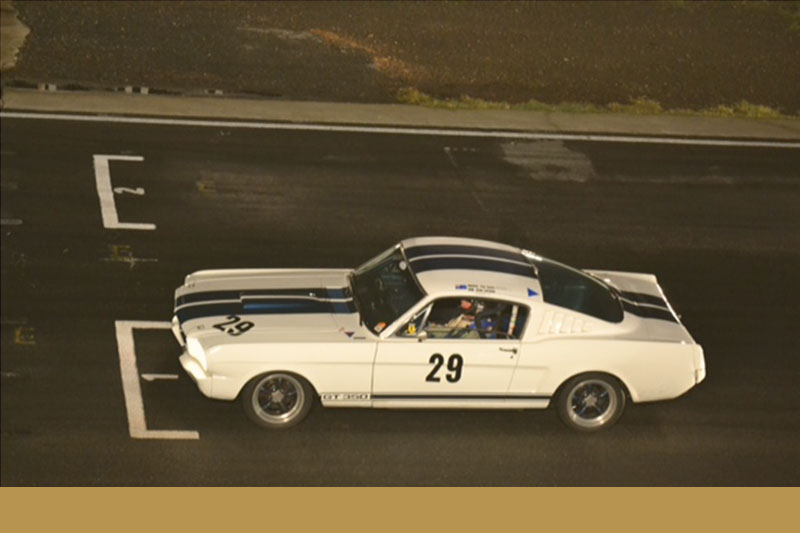 Stirling’s Oscar Matthews may also prove himself worthy of an outright and class win in his unassuming 1984 Toyota AE86, which displayed pace well beyond expectation at October’s Classic Adelaide.

Guaranteed, there will be something for every motoring enthusiast at the Eden Valley Hillclimb this year. Keeping competitors, spectators and service crews fuelled through the day will be a fundraising sausage sizzle courtesy of the Sedan and Cambrai Football and Netball Club and a coffee van courtesy of local outfit Hot ‘n’ Frothy Coffee.

Motorists and local residents please note that Sedan Hill Road (Stott Highway) between Keyneton and Sedan will be closed between 7.00am and 5.00pm for the event.