The 56-year old former Holden stunt driver and ARC competitor from Queensland is at home behind the wheel of the of the 500 horsepower pocket rocket, having driven it at a number of other circuit and rally events including Coates Rally Queensland in 2013 and the World Time Attack in 2014.

“To have the opportunity to participate in this exciting new hillclimb event is particularly exciting given the Audi’s hillclimb pedigree.”

No one is likely to miss the Audi as it passes by. Its unique high-pitched 5-cylinder engine, teamed with a Modena gearbox and differentials, will be heard for miles as it makes its way around the 241 corners that make up the event’s challenging 29km all tarmac course. 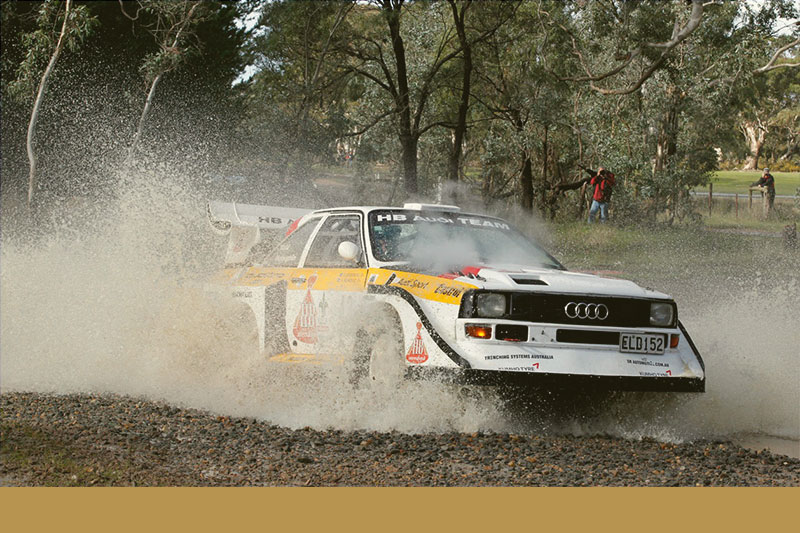 Auto Corsa Group co-director, Stuart Benson, is looking forward to seeing the Audi off the start line in Harrietville.

“This is one of those cars that perfectly epitomises the exhilaration of motorsport,” said Benson. “In fact, there are very few cars active in Australian motorsport today that command the attention that this Audi does and the technical revolution it represents.

The original Audi Quattro made its motorsport debut in 1980. The following year, Michèle Mouton became the first female driver to win a world championship rally, driving an Audi Quattro.

The Group B racer changed the face of rallying being the first car to adopt four-wheel drive into a performance car for rallying.

The Audi Sport Quattro S1 was developed for Group B rallying in 1984. Racing great Walter Röhrl drove it to a win at the 1985 Rallye San Remo and at the Pikes Peak hillclimb event two years later.

Former WRC champion Ari Vatenen also drove Reid’s Hotham-bound Audi replica at the Australian WRC round at National Capital Rally in 2014 when it was still owned by Thompson.

Each driver will make the 29km climb from the picturesque mountain village of Harrietville to the pinnacle of Mount Hotham, six times over the two days.

Promoter, Auto Corsa Group, has signed a three-year deal with the Mount Hotham Alpine Resort Management Board to deliver the two events.