Hotham then Peking to Paris for Garnsworthy

This year’s inaugural Alpine Cup International Hillclimb will prove the perfect testing ground for Rob Garnsworthy’s stunning 1970 Mustang Boss, as both driver and car prepare for the gruelling Peking to Paris Motor Challenge in 2016.

The Victorian rally veteran will tackle the world’s longest hillclimb in the Victorian Alps from 14-15 November and clock some vital time behind the wheel of his car ahead of the 13,000km trek in July next year.

Set with high-clearance suspension and tyres designed more for loose surfaces than race tracks, his highly modified 5.7-litre Mustang has been built specifically for the marathon Peking to Paris event. It takes in Mongolia, Russia and a number of tarmac hillclimbs across the European Alps before finishing in Paris. 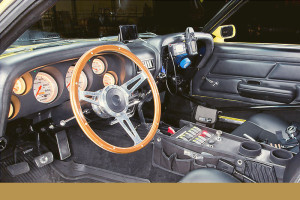 The veteran of the Carrera Sudamericana, Targa Tasmania, East African Safari and Road to Mandalay rallies says the Alpine Cup will provide the perfect opportunity to shakedown his car on a challenging hillclimb course.

“The modifications we’ve made to the Mustang mean it doesn’t fit with many categories of racing, but I want to put some kms on it before the big trip,” says Garnsworthy.

“Having the Hotham hillclimb right in our backyard is brilliant and means I can get used to the car on tarmac, and we can deal with any mechanical gremlins well before the car gets shipped.”

The driver-only, 29-kilometre Alpine Cup International Hillclimb starts in the mountain village of Harrietville and finishes on the summit of Mount Hotham. Each competitor will traverse the course six times over the weekend event totaling 171 competitive kilometres.

Garnsworthy, who has entered in the Alpine Cup’s Heritage category, has an outlook on motorsport of “maximum fun, minimum hassle” and says his Mustang is “built like a tank.”