7 things you may not know about Poatina, Tasmania

With the 2015 Poatina Hillclimb fast approaching, we thought we’d share with you some things you may not know about this quaint and picturesque town, nestled at the foothills of the Great Western Tiers, about 45 minutes south west of Launceston.

1. Poatina is home to Hydro Tasmania’s second largest hydroelectric power station, which still operates today and is located 150 metres underground in a massive artificial cavern. The 5.6 kilometre penstock tunnel – which conveys water from Great Lake to the power station – was fabricated in Italy and constructed on site. 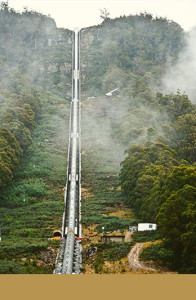 2. Work commenced on the Poatina Power Station in 1958, and it opened in 1964 (watch the video here). Poatina Village was built specifically to house the workers during the construction phase and ongoing operation of the power station and other hydro-electricity projects in the area.

3. In 1995, the whole of Poatina Village was acquired by community organisation Fusion Australia and established as an intentional community assisting homeless and unemployed young people through vocational rehabilitation, as well as Fusion’s training centre – equipping people around Australia and from many other countries in youth and community work.

4. Poatina, in the language of the Palawa Aboriginal people, actually means “cavern” or “cave” … and so for more than 50 years, the Village has been a place of shelter firstly as a Hydro town and now in the great work of Fusion Australia.

6. Some of the less visible aspects of Poatina are a communal gathering each morning; an Arts Colony with a new Arts Centre including one of Tasmania’s only hot glass blowing studios; innovative approaches to farming; and from 2016, Capstone College, a new Special Assistance School for those in years 9 and 10 needing an alternative approach to schooling in order to help them reach their potential. 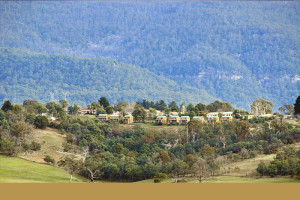 7. Each December, Poatina plays host to an annual closed-road hillclimb and rally competition called the Poatina Hillclimb. A host of tarmac rally and race cars turn out each year to compete over the challenging Poatina Road course, which starts at Poatina Village and snakes 10.2km up Mount Blackwood.