Launceston’s Adam Garwood has won the Tarmac Rally title at this year’s Poatina Hillclimb, while Hobart’s Jamie Lonergan successfully defended his title in the Driver Only category.

Only two of the event’s six runs were completed today following an incident involving a competition car. Hobart’s Andrew Kuc, the car’s navigator, was transported to hospital by Ambulance Tasmania after their car left the road during competition at approximately 1.00pm today. The car’s driver, Cameron Kuc – also of Hobart – is okay. Read the full statement regarding the incident here

Garwood, driving a 2008 Porsche 911 GT3 Cup, and his navigator Cameron Reeves of Brisbane, achieved the fastest accumulated time of the day over his two runs of the event’s 10.2km course snaking up the iconic Poatina Road from the small tourism hub of Poatina Village. 17-year-old Garwood also won the event’s Tarmac Rally class for cars with an engine capacity between 3001 and 4500cc (Class D).

Finishing 9.5 seconds behind 17-year-old Garwood was Somerset’s Eddie Maguire and Mike Potter of Hobart in a 2007 Mitsubishi Lancer Evolution IX RS. Rounding out the top three was Launceston’s Peter Nunn and Keith Johnston in their 1985 Porsche 944 Turbo, a further 7.3 seconds behind Maguire.

“It was awesome,” says Adam. “The were some big names here like Eddie Maguire and Jamie Vandenberg so it’s an honour to win.

“It was also the first time dad and I have raced together,” says Adam of his father and Tasmanian racing stalwart Greg Garwood, who finished fourth in the Tarmac Rally category in his 2001 Nissan Skyline GT-R V-Spec.

Cameron and Andrew Kuc were leading their class (A: 0-1600cc), before they crashed out of the event today. Eddie Maguire also won the event’s class for 4WD vehicles.

Nissan Skyline GT-R driver Jamie Lonergan stopped the clocks with the fastest time in the Driver Only category with an impressive time of 4mins 51 seconds – which also secured him a class win in the category for 4WD cars. Securing second place was Launceston’s Scott Deane in a 1996 Mitsubishi Evolution IV, 19.5 seconds behind and third quickest on the day was Hobart’s Stephen Noble in his 2005 Nissan 350Z. 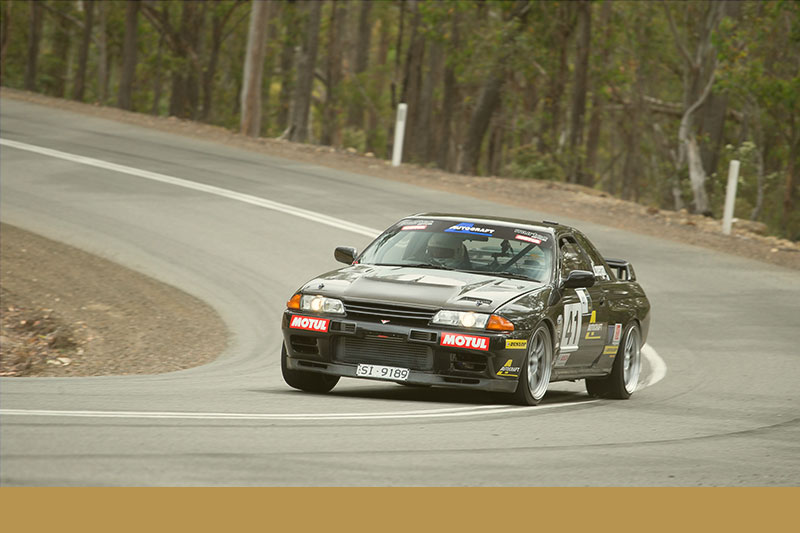 “I am really proud to go back to back,” says Lonergan of his win. “It was a great day of competition and I really enjoyed the time with my fellow competitors.”

“There was some solid competition today from the tarmac rally entrants,” said the event’s Clerk of the Course and Auto Corsa Group, Stuart Benson. “Close competition between drivers like Jamie Vandenberg, Eddie Maguire – these are drivers with great credibility and well-prepared cars, upstaged by young gun Adam Garwood who has had great success on the track this year.”